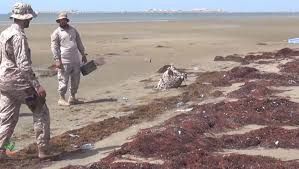 The engineering teams of resistance and coalition working to grab and dismantle mines and explosives left by the militia of the Houthi and giving priority to survey and clearance of the villages, citizens farms and populated areas.

As the Saudi project continues demining mines “Masam” in collaboration with the national programme for demining, and the evacuation of the West Coast with the provinces of Taiz, Hodeidah from landmines and explosives planted by the militia of the Putchists Houthi.

The Saudi project announced “Masam” for the disarmament of more than a thousand of mines during the first week of the month of December, the total of what has been removed since the beginning of the project more than 24 thousand mines, the parents in a number of areas of the west coast complains of the their siege by mines and explosives planted by the militia of the Houthi on their villages which prevented them even from the walking in the vicinity of their villages by militias for mines and Explosives, and the fall of thousands of civilians killed and wounded as a result of the explosion of mines in their areas planted by the militia of the Houthi in retaliation of them.